Featuring music, dancing, food and drink, the event was held at the Whitemarsh Island home of Donald and Carole Arpin. The waterfront estate is located on Turner’s Creek in the Marsh Harbor community.

Festivities included an appearance by Tommy Arpin to honor his mother, Carole, who has been diagnosed with Alzheimer’s. Arpin is a participant in the 2018 Dancing Stars of Coastal Georgia and offered a sneak peek of the dance he will perform at the annual Alzheimer’s fundraiser in May. Last year, Dancing Stars events generated more than $2.6 million across the state, including nearly $400,000 at the Savannah event.

Guests at Moonlight Mingle were encouraged to support the Alzheimer’s Association with a donation in honor of Carole Arpin. Music was provided by the Marshall Brothers Band featuring Stewart Marshall (Stewart & Winfield, Junkyard Angel) as one of the Low Country Rock five-piece band’s three vocalists and guitarists.

“My parents, who have been married for nearly 60 years, moved to Savannah in 1978 to expand the family’s moving and storage business, and both have been actively involved in the community ever since,” said Tommy Arpin. “Mother was on the Savannah Film Commission and helped bring the ‘Forrest Gump’ movie to Savannah. She played a big part in the St. Mary’s Home fundraisers as well as her children’s school fundraisers. She believes in giving back to the church and other worthy causes. That’s one reason we decided to do this fundraiser to honor her and help find a cure for this disease that is slowly taking her from us.” 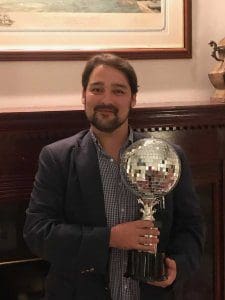 More than five million Americans are living with Alzheimer’s disease, and, every 66 seconds, someone is diagnosed with the disease. Two-thirds of them are women. It is the only disease among the top 10 causes of death in the United States that cannot be prevented, cured or even slowed.

The fundraiser also showcased the Arpin home, which is listed for sale. The brick home with four bedrooms and three full and three half bathrooms is located on Turner’s Creek at 8 Marsh Harbor Drive. It features sweeping views of the marsh and river, along with a library, two fireplaces, a stately dining room, gourmet kitchen, split floor plan and exquisite custom woodwork.

“This house was built for entertaining,” said Tommy Arpin. “My parents hosted annual Christmas parties there for many years, and my brothers and I often entertained our friends in the game room or out on the dock. We made many good memories in this house, and hopefully, someone else will enjoy this house as much as we did.”

Photos and additional details on the home are available at http://www.celiadunnsir.com/eng/sales/detail/519-l-965-bv28l5/8-marsh-harbor-drive-savannah-ga-31410

'Facebook Shops ' is Launching: Right now many small businesses are struggling, and with stores closing, more are looking to bring their business online. FB's goal is to make shopping seamless and empower the small business owner to use their apps to connect with customers. This platform is also going to have the ability to go LIVE in the stores - kind of like QVC. #shoplocal #wearesavannah

The big take away on this interview on OPEN FOR BUSINESS IN HILTON HEAD is that Dennis had SCORE consulting with him ... for FREE.. during every step of pivoting during this pandemic.

A big shout out to his score mentors - Rod Casavant who is also the SCORE CHAIR with the SC Lowcountry Chapter and SCORE mentor Frank Lapari. Your mentoring to small businesses owners is making a difference. It is also making a difference in the recovery of our economy.

Dennis started his company only 2 1/2 years ago. It is named H.O.P.E. Life, Lymphedema and Rehab. H.O.P.E. is and acronym for; Helping Oncology Patients Enjoy Life. They are the only private practice physical therapy clinic specializing in Cancer & Lymphedema treatment in the Carolinas and Georgia.

Dennis, you are doing holy work. Thank you for staying open, keeping your staff and patients safe - and continuing their much needed care. -

OPEN FOR BUSINESS • PT Dennis Ittenbach owner of of H.O.P.E. Life, pivots during covid with SCORE

The big take away on this interview on OPEN FOR BUSINESS IN HILTON HEAD is that Dennis had SCORE consulting with him ... for FREE.. during every step of pivo...

Healthy Savannah is pleased to announce it has received statewide recognition from the Healthcare Georgia Foundation. The coalition has received the 2020 Joseph D. Greene Community Service
View on Facebook
·Share

In my interview with Andy Johnson, CEO of StoneWorks, Inc. of Hilton Head, SC, he talks about how they have pivoted during Covid by reaching out to SCORE Mentors. Mentors Karen Casey and Michael Waters of the South Carolina Lowcounty SCORE chapter guided Andy on all the SBA loan applications when the Covid crisis first appeared. StoneWorks and SCORE have worked together for many years, so Andy knew who to call for business guidance when the pandemic hit.

The SC Lowcountry SCORE group has a Rapid Response Team in place just for small business owners that need help navigating this crisis.

As a small business owner, you don't have to face this crisis alone. There is free help. Call SCORE or unite with another local business owner to share insights.

OPEN FOR BUSINESS How StoneWorks, Inc of Hilton Head is Pivoting During Covid with SCORE mentors

TITLE OF THIS SHOW: HOW StoneWorks PIVOTED DURING COVID WITH MENTORING BY SCORE WHO: Andy Johnson TITLE: CEO BUSINESS THAT YOU ARE IN: StoneWorks, Inc. WHAT ...