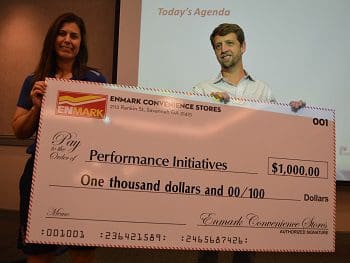 Enmark presented the check to Kerri Goodrich, the founder and Director of Performance Initiatives in Savannah at the final Enmark Encourage Health Educational Lecture on Tuesday, October 28.

Goodrich said, “At Performance Initiatives, we want to inspire and implement principles in programs which will enrich the lives of others physically, psychologically, and spiritually. This donation helps us continue to influence and help the youth in our community.”

The Encourage Health Educational Series happens on the last Tuesday of the months of February, April, June, August and October. The series features presentations from the area’s most respected experts sharing insights on nutrition, fitness and general tips for healthy living.

About Enmark
Founded as Interstate Stations in 1963 by Robert Demere, Enmark Stations, Inc. is a family-run business committed to offering its customers top-notch service and superior products. Today the Savannah-based company, which celebrated its 50-year anniversary in 2013, operates 64 stores in Georgia, South Carolina and North Carolina that offer high quality and competitively priced gasoline, food and beverages, cigarettes, lottery services and more. Enmark’s gasoline is filtered through a trademarked Double Filtered System, resulting in gasoline and diesel that is clean and 100-percent water-free. Enmark customers can save up to $.10 per gallon by using an Enmark Cash Card, a reloadable stored-value card that can be used directly at the pump. For more information on Enmark Stations, Inc., please call 912-236-1331  or visit www.enmarkenjoy.com .