(SAVANNAH, GA) Will Howell, a Darien-based entrepreneur, and Kevin Sheehan, who heads an organization dedicated to improving the lives of differently abled people, will receive the President’s Award when the Lowcountry Down Syndrome Society holds its 11th annual Night of Champions later this year. 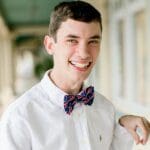 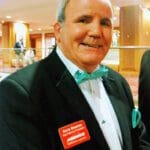 The event was originally scheduled for April 2 but was postponed due to the coronavirus crisis. A new date has not been determined.

Howell, 20, hasn’t allowed cerebral palsy to stand in the way of founding WillPower Ties, a recently launched internet-based firm that markets a line of ties, bowties and even doggie bowties.

Sheehan has been the national president of AMBUCS, an organization famous for the adaptive tricycles – Amtrykes – it provides to give mobility to children who otherwise could never experience pedaling a wheeled vehicle.

“Our Night of Champions is a wonderful event that allows us to salute employers and employees who demonstrate, every day, the value of inclusive work spaces,” said event chairman Tom Kenkel. “To add to that, each year we present our President’s Award. This year, we are privileged to honor two outstanding men whose efforts have directly impacted the quality of life for so many families in our area.”

In Howell’s case, as his school years neared an end, he and his family began to search for a meaningful business he could help to manage. Inspired by John’s Crazy Socks, an internet company founded by a young New Yorker with Down syndrome, the family came up with the idea for a line of designer ties. Howell, working with his father, fulfills orders and writes personal thank-you notes to his customers.

Sheehan is the assistant office manager of the family-based Dan J. Sheehan Co., a Savannah firm founded in 1924 to specialize in tile, paint, stucco and stone work.

He grew up in Savannah, playing and later coaching in AMBUC Stadium without ever thinking much about the name. When he was working a booth at a Savannah Area Chamber of Commerce business expo, he noticed a nearby booth with a “funny-looking” three-wheel bicycle and was told AMBUCS provides the special adaptive equipment to differently abled children.

When Sheehan saw the face of a young girl as she received one of those trikes, he was hooked and has been an AMBUCs member since 1999.

Over the past 21 years, Sheehan has been Savannah chapter president 13 times, including his current tenure, and served in various state and regional leadership positions before becoming the national president-elect, president and immediate past president over 2016 to 2019. In addition to adaptive tricycles, Sheehan and AMBUCS also sponsor adaptive bowling sessions for people who wouldn’t be able to experience the sport without assistance.

Sheehan attends Sacred Heart Catholic Church and enjoys spending time with his 10 nieces and nephews and three grand-nieces. He has also been on the LDSS board for nine years.

Sheehan and Howell met when Sheehan was in Darien to attend a football game between McIntosh Academy and Benedictine Military School. On a trip to the concession stand, Sheehan saw the Howell family and noticed Will had difficulty walking. He approached the Howells and offered to give Will the chance to ride a bike of his own. Now, Will uses his Amtryke to ride to the post office and mail his WillPower Ties orders. WillPower Ties donates a portion of each sale to AMBUCS.

In addition to the presentation of the President’s Award, the Night of Champions will recognize outstanding employer/employee partners.

ABOUT THE LOWCOUNTRY DOWN SYNDROME SOCIETY
The Lowcountry Down Syndrome Society (LDSS) supports people with Down syndrome and their families through local leadership, support, outreach, education and advocacy. Meetings are held every fourth Tuesday of the month, typically with a guest speaker and social time for families to meet and interact. LDSS encourages the whole family to attend; children of all ages are welcome. LDSS is an affiliate of the National Down Syndrome Society. For more information about LDSS, visit ldssga.org

GEORGIA – Today, the State Bar of Georgia Pro Bono Resource Center, along with Georgia law firms and Lawyers for Equal Justice, and in partnership with Lawyers for Good Government Foundation, a non-profit network of more than 125,000 legal advocates with lawyers in all 50 states, announced the launch of a Small Business and Nonprofit Remote Legal Clinic, offering pro bono legal consultations for small business owners and nonprofits to help them navigate the COVID-19 economic crisis and ensuing relief programs.

Qualifying small businesses of 25 or fewer employees and nonprofits will be matched with GA law firms, including Alston & Bird, Eversheds Sutherland, Kilpatrick Townsend, King & Spalding, and Nelson Mullins, for free 45-minute phone or virtual consultations with pro bono attorneys who can answer legal questions and help determine the best path forward for their companies. Consultations will include helping Georgia small business owners or nonprofits understand the legislative language in the CARES Act and Paycheck Protection Program (PPP), and answer any questions related to employment, contracts, commercial leases, insurance and insolvency issues.

LINK FOR SMALL BUSINESSES AND NONPROFITS TO REGISTER: www.lawyersforgoodgovernment.org/covid-small-business-georgia-client-intake

Under phase three of stimulus relief legislation passed by Congress, an additional $320 billion has been provided to make new loans under the PPP, which provides forgivable loans to small business that keep employees on the payroll for eight weeks. The measure also includes $60 billion in loans and grants under a separate Economic Injury Disaster Loan program.

“An extraordinary number of small businesses and nonprofits are suddenly fighting for survival. While our firms may otherwise compete in business, we work side-by-side on pro bono and will always come together to fulfill our professional duty to help the community, now more than ever,” said John Fleming, Pro Bono Partner at Eversheds Sutherland.

“The attorneys in our network strive to serve Georgians who do not qualify for free legal services but may not be able to afford traditional representation. That includes many of the small businesses that are looking for support at this time,” said L4EJ Executive Director, JoAnna Smith.

“Hundreds of thousands of small business owners and nonprofits, many of whom already operate on very narrow margins, are still struggling with questions about how their businesses will survive the COVID-19 pandemic. This small business and nonprofit legal clinic can help them navigate the economic crisis that was no fault of their own, and provide them with guidance they desperately need at this time,” said Lawyers for Good Government’s executive director Traci Feit Love.

If you are interested in learning more about the Georgia Small Business and Nonprofit Remote Legal Clinic, I’d be happy to connect you with folks at the Georgia Pro Bono Resource Center, or any of the firms involved. ... See MoreSee Less

#watercooler chat about Savannah, join in the conversation, Monday, July 13, 2020 at 9:00am. Bunny Ware will be joining us and then Dr. Benton with Hospice Savannah. If you want us to mention your good news, please leave a comment below. ... See MoreSee Less

Laurie Brown thank you for sharing how you built your online gift basket company. I loved learning the specifics on Wish Pond and Google Ads and how you were able to target your audience around the country and build your email list into the thousands. Thank you SCORE Mentors for your mentorship to so many small business owners. It makes a difference for them and our country. Rod Casavant www.youtube.com/watch?v=ahWrKP3eG04 ... See MoreSee Less

Harvard Business Review
The Busier You Are, the More You Need Quiet Time

OPEN FOR BUSINESS) Interview with Rachel Cantore of Fusion FitFusion Fit Training. Rachel talked about a platform she uses for teaching her classes called Thinkific. Great tips from Rachel about running her business. youtu.be/ASGWkT5s6fg