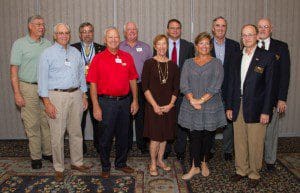 In addition, three new board members were installed. These are Dave Fox, Kevin O’Neil, and Ton Stephens. In addition, Charlie Arraiz was appointed to fill a previously-vacated board position.

The Kiwanis Club of Skidaway is an all-volunteer, non-profit organization dedicated to improving the lives of the youth of Chatham County, one child at a time. Volunteers serve in a wide variety of agencies and non-profits throughout the county, working with children in schools, sports, churches, and many other programs.

Throughout the year, Kiwanis of Skidaway holds several fund-raising events and projects, the proceeds of which are donated to local agencies working primarily with disadvantaged youth. In 2015, the club has donated over $65,000 to such causes in and around Savannah.

ABOUT KIWANIS CLUB OF SKIDAWAY
Kiwanis Club of Skidaway raises awareness about at-risk children’s needs. Since the club was established (in 1988, initially as Golden K of Skidaway), they have supported more than 40 area organizations in Chatham County and have provided more than $1,400,000 of grants. For more information, visit http://www.kiwanisofskidaway.com