(SAVANNAH, GA) Enmarket’s Enrich Life Campaigns, which involve a variety of projects ranging from sponsoring the Savannah Golf Championship to fundraisers in the chain’s 128 stores to benefit the Leukemia and Lymphoma Society, raised more than $320,000 for local charities in September.

The Enmarket Charity Classic was held on Sept. 29 at The Landings Club– Deer Creek Course, the site of the Korn Ferry Tour’s Savannah Golf Championship that took place later in the week. A full field of 144 players teed off in a shotgun start at the Deer Creek course. Top sponsors had the opportunity to play in the event’s Skyway Capital Markets Pro-Am on Sept. 30 and to participate in a private player clinic with a professional from the Korn Ferry Tour, the PGA Tour’s developmental Tour.

The event raised $150,000, which was divided among three local charities: $65,000 to the 200 Club of the Coastal Empire, which serves families of fallen first responders; $65,000 to Make-a-Wish Georgia, which grants wishes of seriously ill children; and $20,000 to Second Harvest Food Bank. 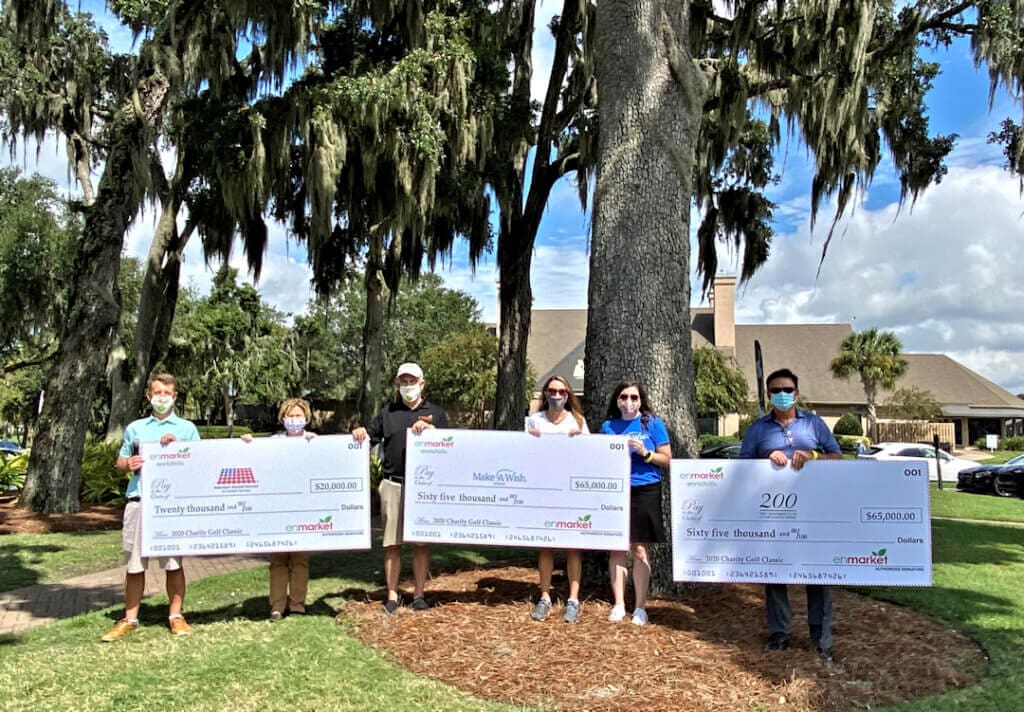 “In these uncertain times, the generous support from Enmarket and the sponsors of the Enmarket Charity Classic help us bring hope to Savannah-area wish kids at a time they need it the most,” said Meghan Lowe, Make-A-Wish Georgia SE Development Director. “With over 40 children locally waiting for their wishes to be granted, our commitment to bringing these wishes to life has never been stronger.”

“The Two Hundred Club and the many family members we proudly and honorably serve, are grateful for the tremendous generosity shown by the wonderful Enmarket family. We have truly enjoyed watching our surviving family members attend and graduate college without any debt. This would not be possible without the generosity shown by Enmarket,” said Mark Dana, President, 200 Club of the Coastal Empire.

While the golf-related fundraisers were being held, Enmarket was also at the midpoint of its Leukemia and Lymphoma Society (LLS) fundraiser, where each store partners with its customers to raise money for the LLS Light the Night Campaign. Throughout the month-long event, Enmarket stores sell Light the Night paper icons for a dollar apiece to support the non-profit’s mission to support research and help patients and their families who are affected by blood-related cancers. This year, the campaign has brought in $170,000 for the charity, which fights blood and blood-related cancers.

This is the eighth consecutive year that the entire chain has participated in the Light the Night campaign, raising over $800,000 during that time.

“These diverse projects reflect the spirit of our mission statement, to enrich life,” said Brett Giesick, president of Enmarket. “Our involvement with the Savannah Golf Championship and the next generation of PGA Tour stars demonstrates our interest in healthy lifestyles, as reflected in the many athletic events we are involved in, from the Enmarket Savannah Bridge Run to the Savannah Hockey Classic. As far as Light the Night, well, the stores love to compete for bragging rights each year over which one – with its customers’ help – raised the most money for this good cause. That friendly competition reflects our family-like spirit.”

“The Leukemia & Lymphoma Society is grateful for the longstanding partnership with Enmarket which not only raises critical funds to support cancer research and patient support, but also helps to raise awareness throughout GA, SC and NC. We thank each of their staff and customers for supporting LLS and providing hope to all blood cancer patients,” says Jennie Brewster, the Campaign Development Director, Georgia/South Carolina Region at The Leukemia & Lymphoma Society.

ABOUT ENMARKET
Enmarket, Savannah’s largest convenience store chain, employs more than 1,300 people and operates 127 convenience stores, 14 quick-serve restaurants and two fast casual restaurants as the 49th largest convenience store operator in the country. Founded as Interstate Stations by Robert Demere in 1963, the retailer operates convenience stores in Georgia, South Carolina and North Carolina and was noted as the industry’s “Biggest Mover” in store count ranking by Convenience Store News in 2018. The company is committed to giving back to the community through many charitable contributions and volunteer efforts, offering fresh food, healthy snacks, and competitively priced quality fuel as part of its mission to enrich life. www.enmarket.com

(#WATERCOOLER) Join the conversation LIVE on SAVANNAH COMMUNITY HEADLINES, Monday, Oct 26, 2020 from 9-10am. Learn about a new company that recycles glass, have a virtual tour through the warehouse of America’s Second Harvest of Coastal Georgia , and meet the owner of Dandelion Dock, they create cowork spaces for military spouses to maintain portable careers. ... See MoreSee Less

Q&A HOUR ON HEALTH INSURANCE
(#WATERCOOLER) Are you confused about health insurance? On October 19, 2020, at 9AM, there will be an hour long Q&A, LIVE on Facebook, with your questions. Are there any "real" health insurance plans that do not cover pre-existing conditions? What do people do if they can't afford it? Can any company offer a group health plan? Do you think Pre-existing conditions will no longer be covered? What is a Red-Truck Insurance plans? Join the LIVE conversation with area experts answering your questions. ... See MoreSee Less

(Savannah, GA) - Savannah SCORE has announced the eight finalists for the organization’s 3 rd Annual BizPitch
Savannah™ entrepreneurial competition. BizPitch Savannah™ is Savannah SCORE’s kinder, gentler version of
TV’s “Shark Tank”. On November 6, the finalists will pitch their business ideas to a panel of judges for a
chance to win over $10,000 in cash and free professional services to help launch their new businesses.

BizPitch Savannah™ 2020 is presented by the Savannah Chapter of SCORE, the nation’s largest provider of
free business mentoring and educational programs for aspiring entrepreneurs and small business owners.

Timeline PhotosA big congratulations to the BizPitch Savannah 2020 finalists! On Friday, November 6, these budding entrepreneurs will pitch their ideas to our panel of judges for the chance to win over $10,000 in cash and free professional services to help them launch their new Savannah-based businesses! Learn more about each finalist below.

Amy and Scott Pierce of My Nurse Now – My Nurse Now is the area’s first and only agency to provide Urgent Care services at home for those who cannot travel. They offer a wide variety of in-person medical, nursing, and therapy services, as well as Telemedicine-based services.

Yolanda Rivera-Caudill, MD of The Tiny Beet – The Tiny Beet is a pediatric medical practice that addresses the widespread problem of childhood obesity by including behavioral, eating, and sleep habits as key elements in the treatment of chronic illness.

Kaylyn Stone of Oshun – Oshun is a high-end e-commerce platform that provides exposure and
new channel opportunities for black-owned, luxury vendors while also providing consumers with a curated assortment of luxury, contemporary, and designer brands.

Erika Tate of Loravore®️ Virtual Learning for Upskilling Professionals [LVL UP] – LVL UP is a digital platform for the K-12 teaching workforce designed to increase the number of teachers who can effectively deliver digital/remote instruction for their students.