Peacock Subaru was featured in Puppy Bowl XV to give national recognition to adoptable pups currently under the care of the Palmetto Animal League. 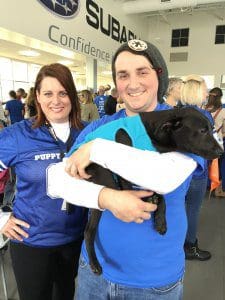 Included in the turnout was a puppy named Cameron, pictured with Jill Jauch with Peacock Automotive and Brendan Peavy with the Palmetto Animal League.

Included in the turnout was a puppy named Cameron, pictured with Jill Jauch with Peacock Automotive and Brendan Peavy with the Palmetto Animal League.

Animal Planet crews were in the area in December to film puppies between 3- and 6-months old at the dealership and PAL’s facilities. Footage from the shoot was incorporated into vignettes aired as commercial messages for Subaru during Puppy Bowl XV. Subaru of America picked Peacock Subaru for the spots because of its involvement with local animal welfare organizations.

The Palmetto Animal League brought adoptable dogs to Sunday’s party. Supported solely by individual donors and “Partners in Rescue” such as Peacock Subaru, PAL’s no-kill shelter serves as a temporary residence for about 200 dogs and cats.

The puppy bowl began when Animal Planet, a cable network focused on animal-themed shows, confronted the question of what to program against the Super Bowl with a mock football game featuring puppies playing on a gridiron-marked rug. The idea caught on and now attracts millions of viewers. Since its inception, the program has starred adoptable puppy “players” and has since added kitten “cheerleaders” and other pets looking for a hom.

Subaru is a national sponsor of Puppy Bowl XV.

ABOUT PALMETTO ANIMAL LEAGUE
Palmetto Animal League is a private, non-profit, no-kill animal rescue organization that saves abandoned, abused and neglected pets and places them in loving homes. Visit PAL’s adoptable cats and dogs at their adoption center, located in Okatie’s Riverwalk Business Park, Monday through Saturday from 12 p.m. to 7 p.m. These are Lives Worth Saving. Join the No Kill movement today by visiting www.PalmettoAnimalLeague.org.