Sponsors of Savannah Maritime After Hours Donate $2,000 to Ronald McDonald House of the Coastal Empire

Sponsors of Savannah Maritime After Hours Donate $2,000 to Ronald McDonald House of the Coastal Empire

(SAVANNAH, GA) For the fifth consecutive year, Savannah Maritime After Hours presented a holiday donation to the Ronald McDonald House of the Coastal Empire. This year, the donation was increased by $500, for a total of $2,000, which will be used to support the growing needs of the House and their residents. 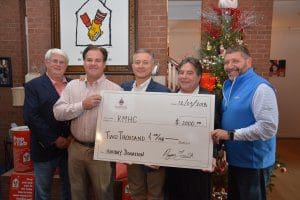 Each year, members of the Savannah Maritime After Hours are able to raise these funds through networking events held on the first Wednesday of each month.

“A small donation during the holidays can make a big difference for these families during such a stressful time,” said Ryan Faulk, Partner of Savannah River Logistics. “We believe families are stronger together and a sick child heals faster when they are surrounded by love and support. And we are extremely grateful to all of our members who make this annual donation possible.”

For more information on this donation or on how to get your organization added to the recipient list, contact Billy Robinson at billy@portcitylogistics.com.

ABOUT THE RONALD MCDONALD HOUSE© OF THE COASTAL EMPIRE
One of 365 Ronald McDonald Houses worldwide, each House is an independent non-profit, 501©3 community organization. The Savannah House is governed by a 16-member board of directors and managed by a full-time staff of four. The mission of Ronald McDonald House Charities© of the Coastal Empire is to create, find and support programs that directly enhance the health and well-being of children and families. The House has thirteen bedrooms and operates on a waiting list most of the year. The Savannah Ronald McDonald House provides a “home away from home” for critically ill and injured children and their families who are receiving treatment at Children’s Hospital at Memorial, Candler Hospital, or where needed in the Coastal Empire. Since the House first opened its doors 30 years ago in 1987, over 10,200 families have been served. The house currently serves approximately 290 families each year. Although the average length of stay runs 16 days, some families stay much longer.