Enmarket opened its latest new store January 7, 2021 in Pooler. The new store at 1264 U.S. Highway 80 East, at its corner with Pine Barren Road, is a travel center, serving both regular travelers and heavy truck traffic.

The Enmarket Encourage Health Educational Series, in partnership with Healthy Savannah, and sponsored by Center Parc Credit Union, will stream its next interactive LIVE broadcast on January 7 exploring “Activity-Friendly Routes to Everyday Destinations.”

(SAVANNAH, GA) Flu season is in full swing. But this one is like no other. As we await a COVID-19 vaccine, there’s another that’s readily available in Savannah, thanks to a CDC flu prevention grant. On Sunday, December 13, the Chatham County Health Department will offer free seasonal flu shots to the public in downtown Savannah. While the coronavirus has yet to be conquered, it’s time to fight the flu we know. 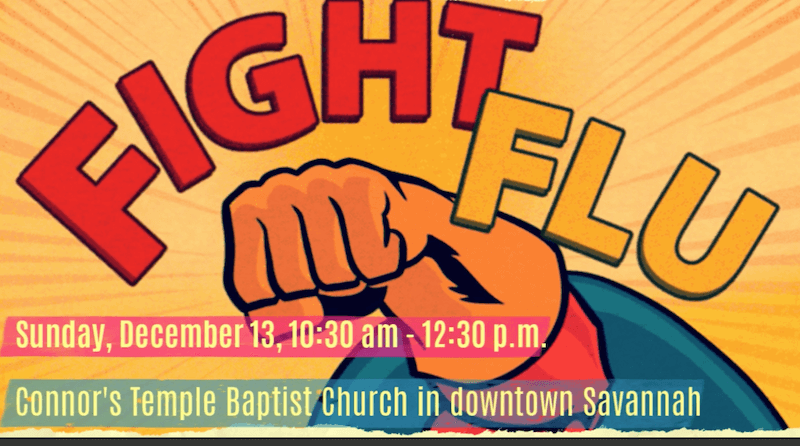 “Getting the flu vaccine is especially important this year since COVID-19 and the seasonal flu will circulate through the population at the same time,” said Nichele Hoskins, Flu Education Campaign manager. “This compounds the risk among African Americans and other ethnic and racial groups disproportionately affected by COVID-19.”

The walk-up clinic will be managed by the Chatham County Health Department and is made possible by Healthy Savannah, in partnership with the YMCA of Coastal Georgia, through a grant from the Centers for Disease Control and Prevention called REACH. That’s Racial and Ethnic Approaches to Community Health. The overall objective of the local grant is to reduce health inequities experienced by Black residents in Savannah’s and Chatham County’s low-wealth neighborhoods.

The event is also supported by Center Parc Credit Union and Enmarket.

The event sponsors will hand out prizes to participants and free flu shots will be distributed to anyone six months and older from 10:30 am. to 12:30 p.m. at 510 West Gwinnett St., across from Conner’s Temple Baptist Church. Everyone is asked to wear a face covering and practice social distancing.

The Centers for Disease Control and Prevention tapped recipients of the Racial and Ethnic Approaches to Community Health Grant to reduce the risk of African Americans contracting the seasonal flu. Flu season begins in October and will run into the spring. The CDC awarded the YMCA of Coastal Georgia and Healthy Savannah $171,336 to increase that awareness, knowledge and vaccination rates among Black residents of Chatham County.

Under the flu prevention grant, Healthy Savannah is engaging trusted community members to address misinformation about the flu vaccine, educate community members about the risks of getting the flu, and foster stronger connections, communication and trust between people who need vaccines and vaccine providers.

For more information or to get involved as a Flu Fighter, contact Nichele Hoskins, Flu Education Campaign manager at nichele@healthysavannah.org or (205) 222-2030.

ABOUT THE YMCA OF COASTAL GEORGIA/HEALTHY SAVANNAH GRANT FOR RACIAL AND ETHNIC APPROACHES TO COMMUNITY HEALTH: In September 2018, Healthy Savannah and the YMCA of Coastal Georgia were awarded a five-year, $3.4 million grant called Racial and Ethnic Approaches to Community Health. This funding, awarded by the Centers for Disease Control and Prevention, has been deployed by the Savannah/Chatham County project team to reduce health inequities experienced by Black residents in low-wealth neighborhoods. The local project is called Healthy Opportunities Powering Equity, or HOPE. Its aim is to increase the availability of high-quality nutrition, increase physical activity by creating greater access to safe places to walk, run, bike and play, and foster stronger connections between people and the healthcare providers who serve them. Working with more than 200 community partners and organizations, the team’s work elevates the health and wellness of our community through policy, systems, and environmental change.

(SAVANNAH, GA) Enmarket’s Enrich Life Campaigns, which involve a variety of projects ranging from golf tournaments to fundraisers in the chain’s 128 stores to benefit the Leukemia and Lymphoma Society, raised more than $320,000 for local charities in September.

(ATLANTA, GA) The stadium formerly known as Turner Field is getting a new name. Georgia State University has signed a stadium naming-rights deal with Center Parc Credit Union. GSU, a Sun Belt Conference school, has agreed to a 15-year deal worth $21.5 million with the organization that operates under Atlanta Postal Credit Union, making it one of the richest naming rights deals outside of Power Five conferences, according to Sports Business Journal. Center Parc Credit Union plans to open two Chatham County locations in September at the Pooler Walmart, 160 Pooler Parkway, and the Savannah Walmart, 6000 Ogeechee Road.
https://www.bizjournals.com/atlanta/news/2020/08/09/turner-field-to-receive-new-name-credit.html 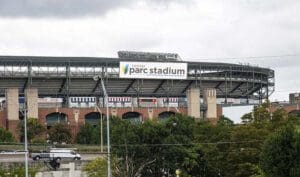 END_OF_DOCUMENT_TOKEN_TO_BE_REPLACED

Enmarket Thunderbolt Store Opened. (SAVANNAH, GA) A new Enmarket opened this week on the north side of Victory Drive in Thunderbolt, becoming the 127th store in the growing Enmarket chain. The opening of the store created about 30 jobs.

(SAVANNAH, GA) Enmarket customers can get a glimpse of the future, now that the completely rebuilt Enmarket at 4318 Ogeechee Road in Savannah is open for business. The relaunched store is the prototype for future new builds for the rapidly expanding Savannah-based chain of convenience stores/food service establishments.

“This particular store is right next to the new headquarters, which is one of the reasons it was the perfect location for our new prototype,” said Brett Giesick, president of Enmarket. “We wanted a clean, modern design that accommodates the multiple roles of an Enmarket store – a fueling station, a deep convenience inventory, appealing and healthy prepared food options, and a modern, state-of-the-art carwash.” 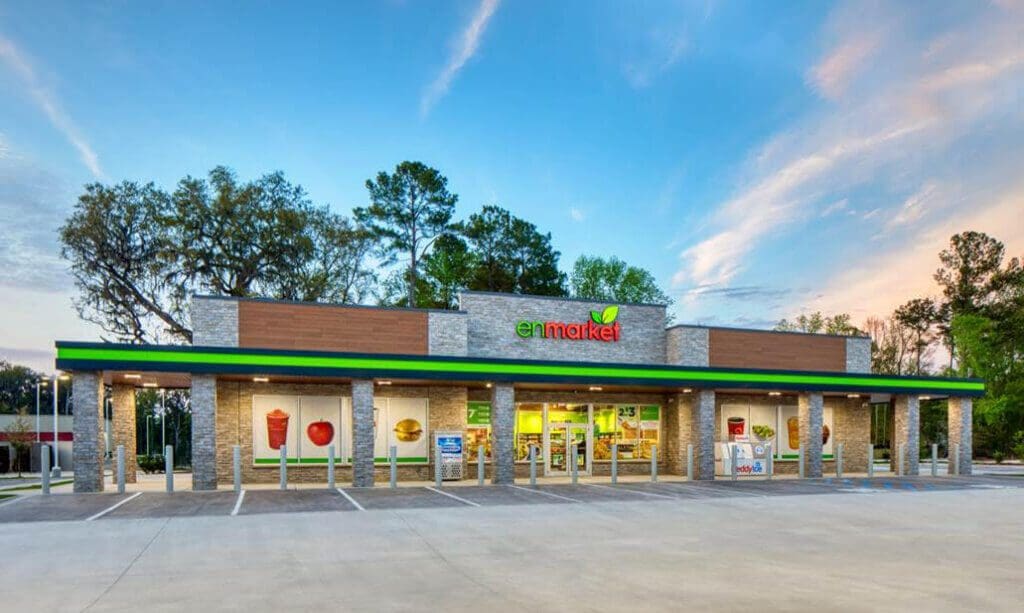 “The store offers full foodservice at The Eatery, with breakfast, lunch and dinner options, along with Mooz frozen yogurt and Enmarket’s Bean-to-Cup Coffee. The fueling options include gasoline, diesel and ethanol-free gas, and customers can save as much as 10 cents a gallon on all grades when they use their enPay card,” Giesick added.

The site was already in use as an Enmarket when the chain’s headquarters was constructed next door. The original store was razed to make way for construction of the modern replacement. Now that it’s back open after a soft opening on March 24, the new 5,893-square-foot store has a workforce of 25 employees, about double the previous number.

The store is the latest step in the development of an Enmarket campus at the intersection of Chatham Parkway and Ogeechee Road. It joins a 22,000-square-foot office structure that houses the three-state convenience chain’s headquarters, along with a second building of equal size to be used a flex space and room for future expansion. Two out-parcel lots on the compound are earmarked for future development, sale or lease. 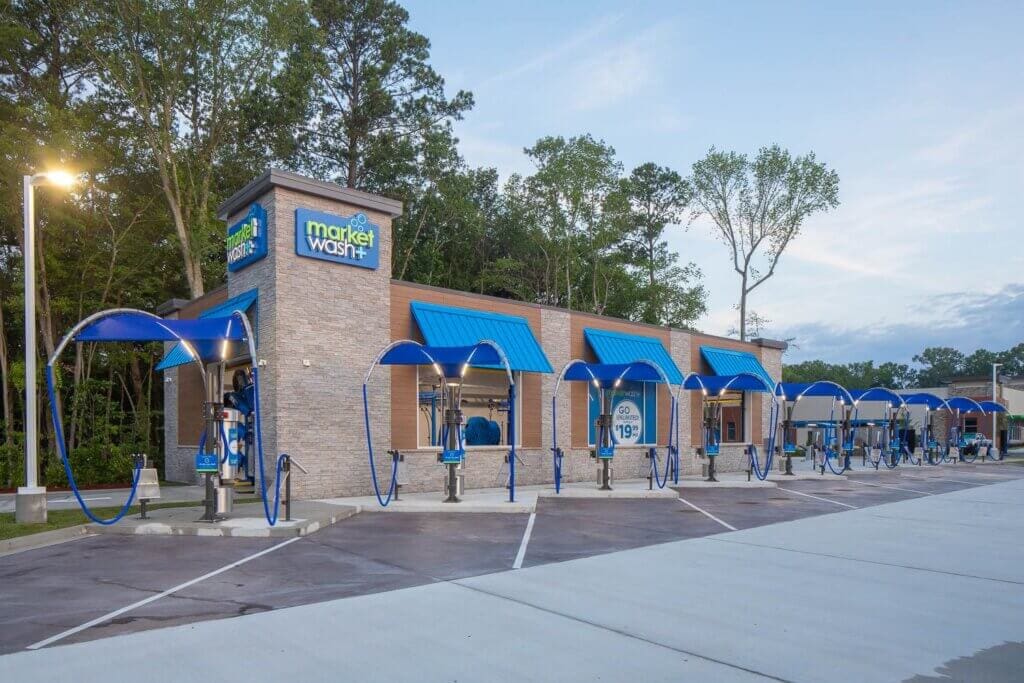 “One of the many features we are excited about at the new store is the new car wash. It’s our first Marketwash+, which is an 80-foot tunnel wash. It’ll stand up to anything Savannah and the surrounding region’s pollen season can throw at our cars and, best of all, it does a fantastic job in about half the time of most car washes,” said Giesick. “That includes free vacuums for customer use. We know it will be popular with customers, so we are adding membership wash opportunities that start at $19.99 a month.”

West Construction served as the general contractor for all phases of the compound’s construction.

ABOUT ENMARKET
Enmarket is Savannah’s largest convenience store chain, employing more than 1,300 people and operating 125 convenience stores, 14 quick-serve restaurants, and a fast casual restaurant as the49th largest convenience store operator in the country. Founded as Interstate Stations by Robert Demere in 1963, the retailer operates convenience stores in Georgia, South Carolina and North Carolina and was noted as the industry’s “Biggest Mover” in store count ranking by Convenience Store News in 2018. The company is committed to giving back to the community through many charitable contributions and volunteer efforts, offering fresh food, healthy snacks, and competitively priced quality fuel as part of its mission to enrich life. www.enmarket.com

“The location is a strategic part of our growth plan in the Beaufort area,” said Brett Giesick, president of Enmarket. “Highway 21 is a heavily commuted artery connecting Charleston and Beaufort, making this location a prime opportunity for us.”

The 4,475-square-foot store will reopen Thursday after new fuel dispensers are installed and the interior is outfitted with improvements such as Enmarket’s popular bean-to-cup coffee brewers.

The location will undergo a more comprehensive renovation before the end of the year. The prime feature of the remodel will be the installation of Enmarket’s signature Eatery restaurant. The existing car wash will be updated as well. The store is expected to stay open throughout the remodel.

The Beaufort store will offer such technology-based amenities as Skip Frictionless Checkout, which lets customers skip lines at the cash register and pay via their cell phones, as well as Enmarket’s loyalty program Enjoy Rewards and enPay. Customers will find the stores well stocked, including fresh food and healthy snacks. The store offers unleaded, mid grade, premium and diesel fuels.

ABOUT ENMARKET
Enmarket, Savannah’s largest convenience store chain, employs more than 1,300 people and operates 125 convenience stores, 14 quick-serve restaurants and a fast casual restaurant as the 49th largest convenience store operator in the country. Founded as Interstate Stations by Robert Demere in 1963, the retailer operates convenience stores in Georgia, South Carolina and North Carolina and was noted as the industry’s “Biggest Mover” in store count ranking by Convenience Store News in 2018. The company is committed to giving back to the community through many charitable contributions and volunteer efforts, offering fresh food, healthy snacks, and competitively priced quality fuel as part of its mission to enrich life. www.enmarket.com

COMMUNITY CHAMPIONS(WTOC.COM) There has been an increased need for health and social services during the pandemic. The WTOC Community Champions at the St. Joseph’s/Candler African American Health Center have put thousands of people in Chatham County in touch with the agencies that can provide help. That work became easier at almost the exact time it became more important with the timely introduction of the St. Joseph’s/Candler African American Health Center’s Hero Help Me database.www.wtoc.com/2021/01/14/community-champions-st-josephscandler-african-american-health-center/www.youtube.com/watch?v=DNtFF4-Yan8 ... See MoreSee Less

Nearly 9,000 people across the Savannah area have found the help they need during the pandemic through HeroHelpMe.com. The database was launched in January 2...
View on Facebook
· Share

SCORE NEEDS BUSINESS MENTORS(SAVANNAH, GA) January is National Mentoring Month. The Savannah chapter of SCORE celebrates all mentors and is seeking individuals who would like to give back to the community by volunteering as a Savannah SCORE business mentor. Volunteering at SCORE is a way to give back, connect with fellow business owners, and share knowledge with others.savannah.score.org/volunteer-66 ... See MoreSee Less
View on Facebook
· Share