(SAVANNAH, GA) Savannah-based Colonial Group Inc. celebrated 100 years in business on July 21 as representatives of the family-owned company unveiled a historical marker in cooperation with the Georgia Historical Society (GHS) on the site of Colonial’s first service station in Savannah’s historic district.

The occasion was also observed by The Honorable Ben Watson, State Senator for Georgia Senate District 1, who sponsored a Georgia Senate Resolution recognizing Colonial Group for having grown from its “humble beginnings in July 1921 to become one of the leading businesses in the state”; and The Honorable Van Johnson, Mayor of Savannah, who proclaimed July 21 as Colonial Group Day in Savannah. 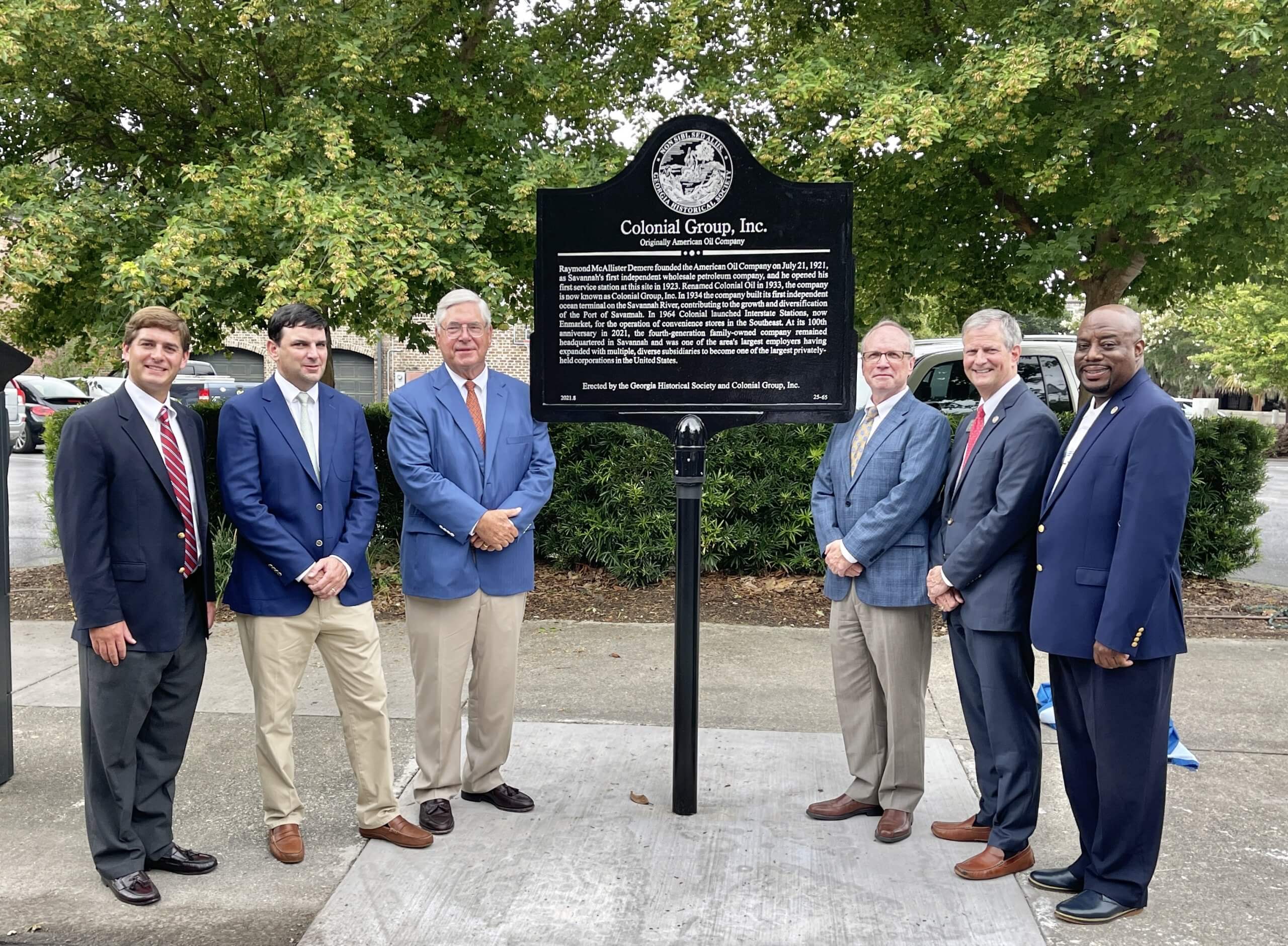 “When my great grandfather, Raymond McAllister Demere, returned to Savannah after serving in World War I, he saw the popularity of the automobile increasing along with the demand for automotive fuel,” Christian Demere, Colonial Group’s President and CEO. “He purchased a 55-gallon barrel of oil and founded Savannah’s first independent wholesale petroleum company on July 21, 1921. Two years later he opened his first service station in Savannah and from there, what would become Colonial Group’s diverse family of companies was born out of the growing demand for petroleum products and the evolution that ensued.”

Representing third and fourth generations of the family-owned business, Demere, along with his father, Robert H. Demere Jr., Chairman; and his brother, Houstoun Demere, VP of Business Development for Colonial’s Savannah Yacht Center; unveiled the marker. They were joined by the senator and the mayor, as well as W. Todd Groce, Ph.D., President and CEO of the Georgia Historical Society, who also hosted the event.

The historical marker reads, in part:

“Raymond McAllister Demere founded the American Oil Company on July 21, 1921, as Savannah’s first independent wholesale petroleum company, and he opened his first service station at this site in 1923. Renamed Colonial Oil in 1933, the company is now known as Colonial Group, Inc.”

It also acknowledges a business that has grown to become one of America’s largest privately-held companies.

“The Georgia Historical Society is pleased to recognize this iconic Georgia-based company and the lasting impact it has had on our state and nation since 1921,” said Groce. “Colonial Group’s sustained, century-long growth is testament to what can happen when you have all the right ingredients for success: great products, excellent succession planning, outstanding intergenerational leadership, and entrepreneurial vision. I am particularly excited about the classroom resources we have developed to tell the Colonial Group story to Georgia students.”

GHS created a case study and company profile about Colonial as an educational resource for Georgia middle school students, which will be available to educators beginning with the fall 2021 school year.

As the company prepared to observe its 100th anniversary in 2021, its leadership was encouraged to research and document its history and create an archive of those findings. A historian and local writers worked with many of Colonial’s employees and retirees to develop a book about the company’s first 100 years. The project is expected to be finalized by the end of the year.

Additionally, Colonial Group commissioned a commemorative logo that will be used for several years to observe the company’s centennial of service.

“Colonial Group has evolved from my great grandfather’s original mission of providing petroleum products to my grandfather’s expansion to commercial and retail markets, then to my father’s diversification of the company into other industries from dry bulk commodities such as kaolin and the storage and distribution of chemical products,” said Demere. “Today, our core competencies are in intermodal logistics, transportation, storage, and distribution of both petroleum-based and many other types of liquid and dry bulk products. We will continue to leverage these competencies in our second century of service and build new ones that add value.”

ABOUT THE GEORGIA HISTORICAL SOCIETY
Georgia Historical Society (GHS) is the premier independent statewide institution responsible for collecting, examining, and teaching Georgia history. GHS houses the oldest and most distinguished collection of materials related exclusively to Georgia history in the nation. For more information, visit georgiahistory.com.