(SAVANNAH, GA) A new Enmarket opened this week on the north side of Victory Drive in Thunderbolt, becoming the 127th store in the growing Savannah-based chain of convenience stores.

The 5,800-square-foot structure at 3024 E. Victory Drive is the third new-to-industry store Enmarket has opened this calendar year.

The basic “bones” of the building became the third store built to Enmarket’s new prototype store design. But in a nod to its historic location and surroundings, some features of the building were designed to better align with Thunderbolt’s Victory Drive overlay district. 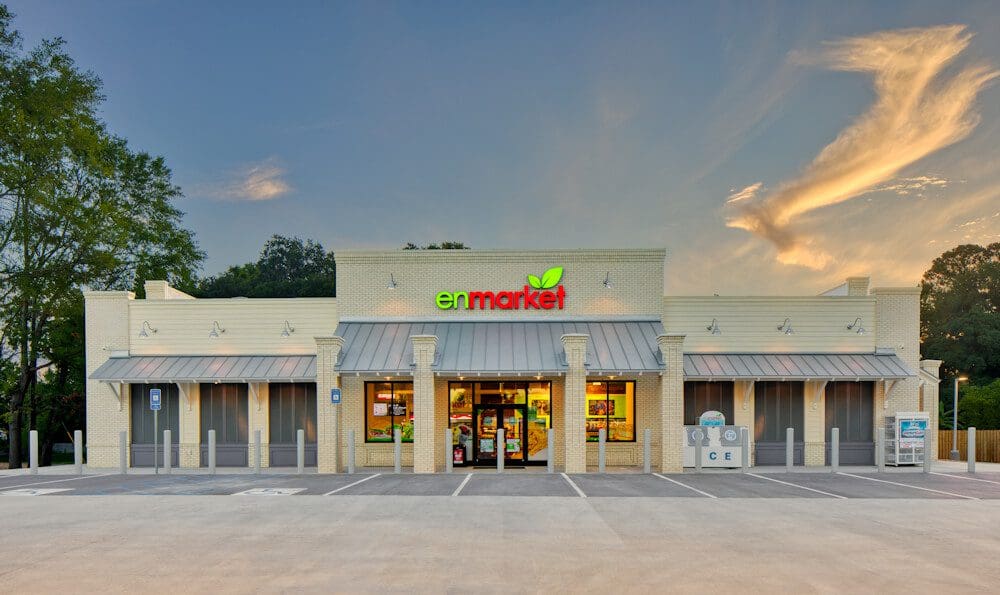 Coastal Georgia buildings from gas stations to restaurants to mercantile buildings were inspirations for the new structure, resulting in a building type that would have been familiar along coastal highways for decades. Enhanced exterior materials include brick, clapboard siding, louvers, galvanized standing seam roofing and bracketed canopies, all of which are elements of the Coastal vernacular.

“We asked our architect to design a building that balanced the small, maritime feel of the town of Thunderbolt with the needs of a modern convenience and food destination for our customers, and the result is very satisfying,” said Brett Giesick, president of Enmarket. “We’ve enlivened that corner with a productive business offering for the citizens of Thunderbolt and convenience for island commuters and beachgoers.”

The new store offers The Eatery, Enmarket’s signature kitchen which will offer hot food for all three dayparts as well as freshly made grab-and-go food options, bean-to-cup coffee and Mooz frozen yogurt. The fuel selection is unleaded, mid-grade, premium, non-ethanol and diesel.

The opening of the store created about 30 jobs.

The three Enmarket stores that have opened in 2020 are strategically based around Chatham County – the growing commercial area developing around U.S. Highway 17 and Chatham Parkway, a Port Wentworth store whose clientele includes truck traffic serving the Port of Savannah, and now Thunderbolt in eastern Chatham, gateway to the suburban islands. All three are variations on a modern prototype.

West Construction was the general contractor on the Thunderbolt store.

ABOUT ENMARKET
Enmarket, Savannah’s largest convenience store chain, employs more than 1,300 people and operates 127 convenience stores, 14 quick-serve restaurants and a fast casual restaurant as the 49th largest convenience store operator in the country. Founded as Interstate Stations by Robert Demere in 1963, the retailer operates convenience stores in Georgia, South Carolina and North Carolina and was noted as the industry’s “Biggest Mover” in store count ranking by Convenience Store News in 2018. The company is committed to giving back to the community through many charitable contributions and volunteer efforts, offering fresh food, healthy snacks, and competitively priced quality fuel as part of its mission to enrich life. www.enmarket.com